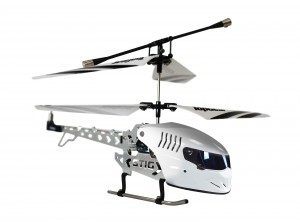 Some say he never blinks, and that he roams around the woods at night foraging for wolves…Some say his skin has the texture of a dolphinâ€™s, and that wherever you are in the world if you tune your radio to 88.4 you can actually hear his thoughts… Some say that heâ€™s terrified of ducks, and that thereâ€™s an airport in Russia named after him…all I know is that Clarkson, Hammond and May call him The Stig.

Now I’ve got that out of the way – when The Stig is kicking back, avoiding ducks and not slamming an expensive sports car around an airfield what else would he do other than fly his signature helicopter around?

The Stig copter features a built-in gyro that recalculates parameters before every flight and has a self-righting mechanism which allows you to return the Stig-Copter to its feet immediately!

It’s handled using a 3-channel remote control and is apparently more stable to fly than other ‘toy’ copters.

You can grab The Stig Copter from Amazon