The Royal Wii or Golden Wii 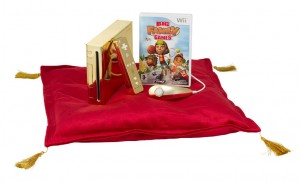 THQ has sent off a golden Nintendo Wii to Buckingham Palace so that Queen Liz can get her game on!

Word is that the gift is a promo stunt for their upcoming Big Family Games.

“BIG Family Games is the ultimate Wii game to get all family members, from grandparents to young children, playing together. The Royal Family is arguably the most important family in the country so we felt that they had to have a copy of the new game. But we thought that Her Majesty the Queen wouldn’t want to play on any old console, so an extra-special gold one was commissioned. We hope that she and the rest of the Royal Family enjoy the game!”

So you reckon Liz, Phil, the kids and grandkids will be gathering around the Nintendo arguing who’s turn it is next?