The Original Big Trak is Back – Move Over Jr! 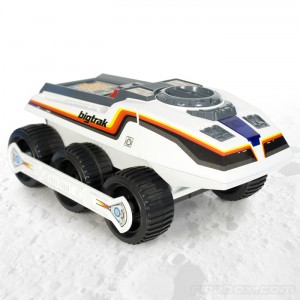 I admit it – I was more than a little excited when Big Trak Jr was announced.

But now, the classic Big Trak has risen from the flames all phoenix-like.

This reanimation of Milton Bradleyâ€™s educational tank is almost identical to the 6-wheeled original.

This Bigtrak comes complete with a front-mounted blue photon beam headlamp (used for firing) as well as the 16 command memory which triggers Bigtrak to remember such instructions as Forward, Backward, Left turn and of course Right turn, as well as Fire and Hold.

So do you buy the original version now or hang on for a month or so for Big Trak Jr for a fiver less?