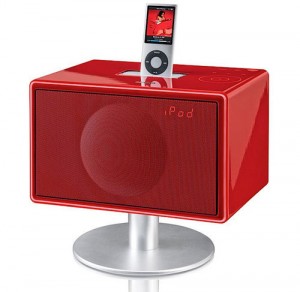 This GenevaSound S apparently has one of the smallest hifi speakers ever released (?) at just under 6 inches.

You get TouchLight controls, which lights up the system upon touch which is a nice….. err… touch; as is the motorized PowerDock, which spins up to close when the iPod is removed from the system.

You get a choice of gloss White, Black or Red finishes and you can plonk it on the included table stand should you so wish.