The First Else – A Linux Smartphone That’s Better Than Everything errrr Else? 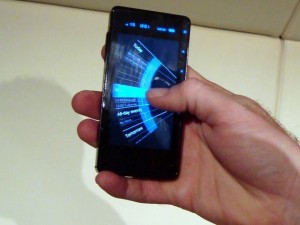 Else is an Israeli company that has designs on the European and British smartphone markets.

They’ve taken quite the novel approach with the First Else which they’ve started from scratch with a Linux-based user interface with some equally novel innovations.

You get a honeycomb-shaped options menu which is accessed by a button along the side of the 3.5 inch capacitive touchscreen with wide 854×480 pixel resolution screen.

If you’re a busy person or in the middle of dodging zombies or gunfire online and you get a call you can press a button on the First Else that will then prompt the caller to press ‘*’ if the call is urgent, or ‘#’ if it can wait till you reach the safe-house or checkpoint.

In this day-an-age of big brother the First Else actually encourages you to record your conversations. There’s a handy record button on the screen to hit during a call if it gets heated or your band promoter makes you another ‘promise’. You can listen to recordings as you browse through the call log, and the camera button works as a record button when the phone is lying face-down.

As I’ve already mentioned, the FE is based on Linux, but it has a new spanky interface that’s designed to allow one-handed operation – handy for smokers and/or caffeine addicits 😉

The First Else has A-GPS that’s employed for “as good as TomTom” sat-nav as well as geotagging photos.

The “as good as a Cannon” camera is a 5 mp number – Else is ignoring the megapixel race stating it “a gimmick”.

With that A-GPS you can also set location-based reminders – walk past your corner shop and you can be reminded that you’ll probably need some milk and/or some more Special Brew.

Reminders can also be programmed to go off when you get a call from a particular contact – handy if you’re dating multiple partners you little rogue you!

The First Else will come in 16GB and 32GB versions with no option to expand the memory with a memory card – just like the iPhone.

Else emphasised they would be producing every app from the ground up for the First.

So, no 3rd party apps so wave good-bye to Google Maps and say hello to the Else-styled sat-nav app.