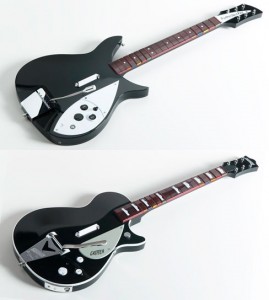 If you can’t wait to live that dream of being one of the fab four you’ll know that there’s only a mere 127 days left until The Beatles: Rock Band is released!

To make the event that is Helter Skelter, Twist and Shout or even A Hard Days Night even more special there’s been confirmation that there’ll be two custom guitars available for purchase on top of the Special Edition bundle which comprises of the game itself, a HÃ¶fner violin bass, Ludwig drums, microphone and mic stand.

The guitars in question are the Gretsch Duo-Jet and a Rickenbacker 325 (I wonder if they’ll do a 12 string version as well Heheheheheh) which will selll for Â£89.00 each when the game arrives on September 9th.

Personally I couldn’t believe that the game was coming without a Ricky in the first place and as for the Gretsch – George played a Duo-Jet mainly in 64 and was his “first good guitar”.

So – all you’ll need then are some Pierre Cardin collarless suits, mop tops and shiny shoes and you’re good to go! 🙂