The Apple iPad is 5 today but are its days numbered? 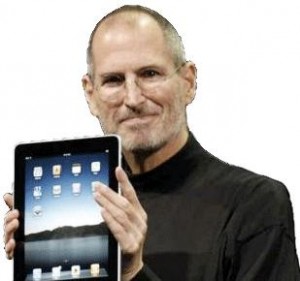 If you have read any of my tablet reviews I will generally openly state that I am tablet-ambivalent. A tablet skeptic, if you will. This kicked off five years ago today when the late, great, Steve Jobs unveiled the iPad in a keynote where he spent a lot of time sitting on a sofa.

Apple was obviously looking to create the same amount of buzz, hype and gadgety lust as they did with the iPhone. The thing is that it just didn’t seem to resonate with me, and plenty of other people. I for one looked at the iPad, and then at my iPhone, back at the iPad and decided that my phone could do everything the iPad could do – it was just bigger. This was the thought process of many others who could not afford to splash more cash on a large phone which couldn’t make calls.

Also, people using iPads to take photos. If this is you. Stop it!

I think Charlie Brooker put it best, as only he could:

The iPad falls between two stools—not quite a laptop, not quite a smartphone. In other words, it’s the spork of the electronic consumer goods world.”

The remarkable thing is that Apple managed to sell these sporks. A lot.

Apple managed to tap in to something – the iPad was large enough for people to read without having to pick it up. This means that it can sit on the arm of your couch when you’re watching the telly and then give it an occasional prod to check your emails or socials. A lot easier than navigating the web on a laptop when you’ve got a burger or drink in the other hand.

Yup, this portable device was destined to stay at home. In fact, in August 2010 I published findings that supported this fact.

Still, Apple was almost unable to keep up with demand in the early days. Quarter after quarter, iPad sales doubled and sometimes nearly tripled compared to the same time a year earlier. By its second full year on sale, the number of iPads sold hit the double-digit millions every quarter—more than 58 million total in Apple’s fiscal 2012.

This was not to be a never ending party though. After the high is the come down. Sales started to slow down with the first decline rearing its ugly head in the third quarter of 2013, when iPad sales fell from just over 17 million a year earlier to a little more than 14.6 million. At the time, the absence of a new flagship model was blamed. But the trend continued.

After a record 26 million iPads sold at the beginning of 2014, the next three quarters saw sales drop.

Ok, so Apple is still selling a loads and loads of iPads, around 68 million in its last fiscal year, which is still pretty good in anyone’s books. The things is it isn’t that people have gone off of iPads, it’s just that there’s not the number of new people wanting them. It seems that we’ve reached iPad saturation point.

Well, back to what I said at the beginning – the iPad is a big phone which can’t make calls. Now, after the initial “let’s see how small we can make a phone” the trend is to super-size your mobile. Android smartphones started to grow in screen size earning them the name Phablets and then, finally and after much nay-saying, Apple brought out the iPhone 6 Plus. Yes, Apple now has a phone that is almost big enough to leave on the arm of your sofa and do that tablet stuff with.

While this is happening laptops, including Apple’s own MacBooks are getting thinner and lighter, encroaching on the iPad’s key selling points in the process. Personally, I’ve gone the way of Lenovo’s Yoga 2 Pro.

Apple still sells way more iPads than it does Macs, true, but Mac sales are on the rise. And the Apple rumor mill is saying the next MacBook Air will be the most iPad-ish yet.

Does this mean that the iPad is on its way out? Could be. What do you predict?

Let’s look back at the first time we officially laid eyes on it, with happy thoughts.