The All New Jaguar XJ – A Gadgety Dream of a Car 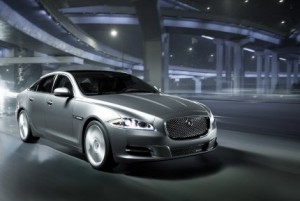 The new Jaguar XJ is one hot pussy cat of gadgety hi-tech on the inside whilst keeping that refined Jag outer layer.

The driver gets the Tesla Sâ€™s stunning touchscreen dash for a start!

Engines first then the shiny:  Jaguar XJ â€™s are packing a 275bhp turbo diesel engine capable of 0-60mph in 4.7 seconds, while the chassis is equally lovely and it has a roof thatâ€™s half made of glass.  The all-new XJ is available to order now (dependent on market), with the first customers due to receive their cars in early 2010. Prices start at Â£52,500 for the standard wheelbase 3.0-litre V6 diesel luxury.

There – that’s the car-spotters bit dealt with.

Now on to the shiny gadgety bit 🙂

The new Jaguar XJ should keep the most tech-loving driver happy.

Dash first methinks as this is the bit you’ll spend most time gawping at.  The panel is a dual-view HD touchscreen, which will show the driver the way with navigation maps while playing a movie for the passenger to watch.  Itâ€™s got speech recognition, Freeview and DAB radio built in, as well as stereo Bluetooth for mobile streaming, USB slots and iPod connectivity. Oh, and whack a CD in it and itâ€™ll rip it to lossless digital format and store it on the carâ€™s own hard drive…. Mmmmm…..

On the driverâ€™s side of the new Jaguar XJ, the instrument clusterâ€™s been ditched as being so 20th Century and has been replaced with a 12.3-inch display that shows your speed and regular details, along with warning messages popping up on the fly.  It even buddies-up with the satnav, showing you a detailed view of upcoming turns within its own â€˜dialâ€™, so you can keep looking straight ahead.

As I mentioned last week – your choonz will be pumped out by the Bowers & Wilkins rig – blasting out 7.1 surround sound from no fewer than 20 speakers!  If your passengers want to listen to Prokofiev and not Primus they can pop on one of three pairs of wireless infrared headphones which can each stream a different audio track – thatâ€™s if theyâ€™ve got bored of the rear seat TVs with wireless touchscreen remotes which play back media off the carâ€™s hard drive.

It doesnâ€™t stop there though: even the new Jaguar XJâ€™s glove compartment has been visited by the tech-faries!  Thereâ€™s a proximity sensor, so a nearby wave of your finger will pop it right open!

The seats are of course heated (or cooled if you prefer), and the front two even have a massage system built in.

Jaguar Cars Managing Director, Mike O’Driscoll, commented:  “These are truly exciting times for us at Jaguar. The new XJ is truly beautiful, exhilarating to drive, and with its bold, enlightened approach to design, it meets the challenges of our fast-changing world. It re-imagines the ultimate sporting luxury car.”

To register interest in the all-new XJ, customers should visit:  www.jaguar.com/allnewx

For broadcast and web video: www.thenewsmarket.com/jaguar