The A14 to literally become a smart road super highway 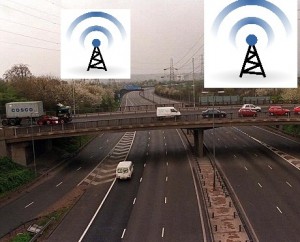 In a team-up between the UK’s Department of Transport, BT and Cambridge start-up Neul, the A14 could be transformed into the country’s first internet-connected road.

The dual carriageway which connects Felixstowe with Birmingham is planned to get web ready with the aim of preparing the country for future tech from wireless toll chargers to automated cars.

The 50 mile chunk of smart road will include a network of sensors with data transmission delivered over white space. Ofcom officially approved the project yesterday, alongside its plans for the rest of the spectrum space.

According to the comms regulator, “sensors in cars and on the roads monitor the build-up of congestions and wirelessly send this information to a central traffic control system, which automatically imposes variable speed limits that smooth the flow of traffic,” Ofcom said. “This system could also communicate directly with cars, directing them along diverted routes to avoid the congestion and even managing their speed.”

That’s all very futuristic at the moment. More realistic uses for the project are based around gathering information on the cars that use the A14, before focusing on heavy goods vehicles, feeding back to a database that the government’s Department for Transport will be able to access.

The Guardian points out that the project would offer a cheaper method for data connectivity and gathering traffic information compared to the mobile network techniques used by companies like TomTom. Instead of connecting to pricey mobile masts, the project will tap into small base stations attached to street lamps or BT exchanges, many of which already exist along the A-road.