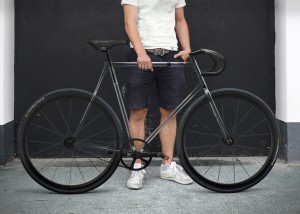 From certain angles you can barely see this road bike which would probably be the stuff of nightmares for much of the country’s pedestrians and commuters.

I’m not saying that it doesn’t look great, well the bits you can see, or that it’s not very clever, because it is. But, as one that has been jostled out of the way by cyclists when making my way across a crossing showing the green man, I can also see the potential for two-wheeled mischief.

The clever stealthiness comes from the use of a lightweight and transparent plastic used in fighter jet canopies called Trivex.

This concept has been put together by Designaffairs and called Clarity Bike, for obvious reasons.

Clarity Bike is constructed from a polymer called Trivex which was first used in helicopter windscreens and then in fighter jet canopies. It’s ideal for bicycles because the material is incredibly light but can withstand major shocks. It’s also resistant to extremes of heat and cold, and can be injection moulded.

Designaffairs explain that “We believe that the Clarity Bike could be a giant leap forward in bicycle frame engineering and production. The design takes advantage of an advanced polymer which combines high impact resistance, lightweight properties and a gentle flexibility that usually would only be expected on an old Italian steel frame.”

If this thing could be made affordably, then I have the right to defend myself 😉