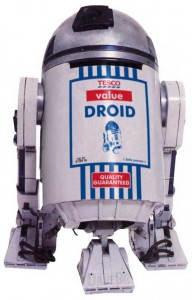 Expect more geeks descending on your local Tesco in the near future as the store has announced that it is trialing a satnav application for your shopping trolley so even blokes will be able to find what’s actually needed on the list rather than aimlessly ending in the beer, crisps and dips section.

The Android app will guide the drfting shoppers around a map of the store using the GPS signal on their smartphone and calculate the shortest and fastest route to picking up all of the items on your shopping list. Handy, but I already know the direct route to the wine 😉

Where I think this app comes into its own is that you have to write a shopping list on your handset before you enter the store so that it can work its magic. Hands up all those that reckon they can remember what they need from the shops and end up returning with half of what’s required plus a load of junk food?

The genius move is that it’ll even allow you to send a list to friends – so, the more organised of the partnership can write the list and let the app guide the hunter/gatherer in their shopping expedition.

The app is being trialed at one Tesco Extra store with a view to rolling it out nationwide if it proves to be popular among shoppers.

Would you give this a blast or are you a champion supermarket shopper? If you’re in Essex and what in on the trial just click here.