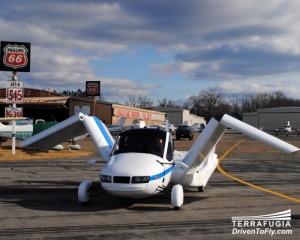 I’ve been following the Terrafugia Transition flying car since 2009. The last I heard was it had been given a new look, now it’s just had a successful test drive, flight and drive again.

US-based Terrafugia, completed a test flight of the Transition over the blue skies of Wisconsin at the EAA AirVenture expo this week.

The $280,000 hybrid car plane has been under development since 2006 and the model that completed the flight this week was the second prototype Terrafugia has developed.

It’s street-legal (with its wings folded), runs on premium unleaded petrol and will do 35 miles to the gallon.

Terrafugia hopes to have the Transition available to buy (in the States) in 2016. If you fancy in on the first batch, you’ll have to whack down a £6,580 deposit and get your pilot’s licence in the meantime though.

Check out a video of the test run below: