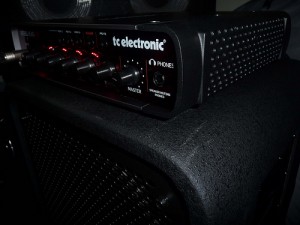 The time had arrived. Subset is getting busier and busier and the fact that I no longer have my ’71 Karmann Ghia Coupe to transport me and my bass rig about meant that I had to look at a more portable solution than my Hartke and SansAmp rig.

I needed something that I could easily get onto the tube with, into a cab or squeeze into the back of one of the guys cars should it be needed.

What I discovered is that over the last 10 years a load of lightweight heads had cropped up since the last time I’d bought a bass mag.

So I had to make a short list and this included Genz-Benz, MarkBass and Phil Jones Bass and after some more research it also included TC Electronic. TC Electronic is a Danish company renowned for their studio gear and guitar effects.

After chatting with people on forums, the friendly guidance of Mark at BassDirect and trying a couple of my short listed amps out it started to become apparent that the Genz-Benz and MarkBass gear was a little too clinical and lacked the warmth I liked (my opinion) and also I wanted to get my sound a little dirty without having to drag my Line 6 Bass Pod and Shortboard around with me.

I think this is a good point to say that I play mainly rock/post-punk/metal but have sessioned for pop, acid jazz and even drum and bass groups. My sound generally leans towards the rocky end and I’ve always wanted an Ampeg SVT rig but never had the money or a roadie to lug everything around! The final thing was that there were plenty of reviews from people that owned SVT’s and said that the RH450 head came pretty darned close to mimicking the Ampeg thanks to its TubeTone – more on that later.

Now, as usual with tech, the smaller and lighter you go and the more you expect from the tiny package, the more you generally have to pay. The TC gear isn’t the most expensive out there but it also is’t the cheapest if you’re just in the market for a new rig. Fortunately I discovered Bonners Music Superstore offered various credit options. The assistance and customer support that I received from both John and Mark at Bonners has been exceptional.

I ordered the RH450 head (the classic head is cheaper but lacks the flexibility, the tuner and the ability to store 3 settings and as I use finger, pick, fretless, 4 and 5 string basses depending who I’m working with having 3 presets was ideal for me), an RS210 cab and the RC4 foot controller. I also got the TC cab cover and carry bag which is kinda like a man-bag/courier bag that fits the amp and pedal as well as the leads.

The RH450 Amp:
I was, and still am, amazed at the RH450. TC Electronic have managed to shove just about everything I can imagine that a gigging bassist needs into the 4kg (8.8lbs), 450-watt head. Even better than that; it’s so easy to use.

TC Electronic proudly states this as being ‘bass amp 2.0’ and as Web 2.0 is all about public feedback and interaction I’m guessing that’s the process that they’ve gone through (they had a test-pilot scheme) and they’ve managed to rethink what a modern bassist needs and package that in a really intuitive amp. I found that the Genz-Benz and MarkBass amps were all about ‘sonic transparency’ which definitely suits a lot of players I know and have seen but it was the RH450’s take on the tube amp that I fell in love with.

The amp has a four band EQ, a clever compressor (Spectracomp), a tube amp emulator, a tuner, a headphone amp, a direct out and three user-defined presets. Thankfully, for the price, everything out of the boxes felt to be high quality and road-worthy.

I wouldn’t advise a long hike with the RS210 but it is easy to move around and it fits easily on a fold-up luggage trolley (mine cost £8).  I have had word that the cab covering is being redesigned as some have found that it marks easily (hence why I bought the cover) but the one I have has the skid-proof finish.

This finish is more practical than beautiful as TC Electronic obviously wanted to steer away from interlocking rubber/plastic corners and as the cabs are designed to be stacked length-wise two-high they had to find a way of doing this safely.

The handles seem sturdy and the metal speaker grilles are recessed and should withstand a lot of use. The speakers in these cabs are, like many bass cabs these days, designed by Eminence for TC Electronic.

To keep these rear-ported cabs more compact, the fully adjustable tweeter is located behind the top of the two woofers.

Let’s Play:
Connecting the RH450 to the RS210 is a Speakon combo jack which means you can either hook-up a regular quarter-inch jack or the supplied Speakon plug for your speaker cable. Being a typical bloke I plugged in and played just altering the gain and EQs and was already impressed. The thing is, the RH450 has a lot more flexibility than that but the sound is so good as a plug-and-play.

The simple 7 dial layout hides the fact that there’s more functions to be played with via the Shift button. That little button gives all except the Master knob a second function. The four EQ knobs can be used to move their centre frequencies across a broad range. The Bass knob, for example, has a default centre of 280Hz, but you can sweep it clear down to 71Hz or as high up as 1120Hz (which is more upper midrange). With the Shift button off (it lights up when on), each EQ knob can boost up to 15dB or cut a frequency band up to 24dB.

In Shift mode, the TubeTone knob becomes the level control for your preset.

The Gain dial becomes SprectraComp after the Shift has been hit and this just pips the TubeTone for the genius award on the RH450. I’ve had plenty of amps that featured a limiter or compressor of some sort and they all have a general failing: they cut the low notes more than the high notes. This is bound to happen with a single band compressor – low notes have more oomph than high notes and hit the threshold sooner. SpectraComp, however, has independent compression for low, mid and high bands. I don’t do a great deal of slap (too many people were better than me when I started in the late 80s) but what I do notice is that for fingerstyle and pick playing the SpectraComp evens things out nicely.

Getting Tubular!
I’m from the age of big hair. One of my favourite bassists is Billy Sheehan and I really dig his driven tone (also the reason I own a first edition Yamaha Attitude Limited) but I also love the dirty, sleazy sound of Jean-Jacques Burnel from The Stranglers.

So many people have already been pleasantly surprised by the RH450’s Tube emulator. TC Electronic describes this feature as ‘tube attitude’, where you get the sound and feel of both the preamp and power amp sections being pushed by your bass. Turn up the TubeTone knob and you get both the sound and response of a tube head. Thankfully you don’t need to get the amp screaming and squealing to get masses of distorted loveliness.

Memory:
Find the settings you like and hold one of the three preset buttons for a couple of seconds and it’s stored. At the moment I’ve my clean sound in MEM1, MEM2 has my fretless EQ stored and MEM3 takes care of my tube driven dirt. The RC4 foot controller makes switching a dream as well as operating the mute and having an onboard tuner display.

Tuner:
That tuner on the head/pedal is always on, and is really easy to read in gig conditions. I found that the tuner picked up notes quickly and the clear up and down arrows gets you to the in-tune dot quickly. Between songs hit the mute button and the tuner goes one step further by using the ring of dots around the bass EQ knob to provide even more guidance.

Other Bits of Interest:
TC Electronic has gone that extra yard and included things that you might overlook when buying your next amp. They included a pair of RCA jacks on the back and even provided a cable with a mini-jack on one end for an MP3 player, a digital out for recording, an effects loop, and a transformer- balanced DI (with switchable pre/post) and a good quality headphone amp for silent rehearsals.

Verdict:
I am sure that my RH450 and RS210 rig will have me heard in most of the pub small/medium club venues that I will be doing and should my bank account and size of venue require it I’ll add the RS212 or even the RS112 which will then round off my sound and be able to fill any venue with low end.

Tonality – as I’ve mentioned, if you’re looking for that transparency or sterility as it felt from other amps ignore the TC. If you want the tonal character and warmth that you’d expect from a heavy tube amp but want to be able to slip it into a shoulder bag say “Hello TC Electronic RH450!”.

With the RS210 you get a focused and punchy sound that’s clean and focused with a smooth middle and tight bottom.

If you want a big sounding, versatile rig that doesn’t induce a hernia each time you gig I can’t enthuse about the TC Electronic gear enough.