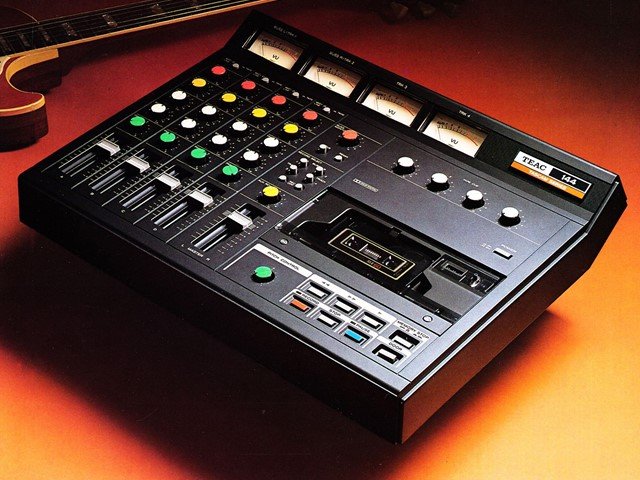 Tascam is one of those brands that almost every musician of a certain age will recognise. To me and countless others, Tascam will always be synonymous with its 4-track Portastudio. As a wannabe guitarist who later ‘bloomed’ to become a mediocre bass player, the Tascam Portastudio was the stuff of legend. Around the mid-eighties to mid-nineties, the Portastudio was the best way to get demos down. Using mine, I recorded demos to join such bands as Queen Adreena (nearly got that one, too!) and Cradle of Filth, amongst many other more local outfits.

It’s time to put on your best dancing pants and celebrate the 50th anniversary of Tascam – the company that effectively invented if not revolutionised home studio.

It is no exaggeration to state that Tascam has irrevocably influenced the way people make music. From the 4-track Portastudio to the Emmy Award-winning DA-88 digital multitrack recorder, on to the company’s Model series recording mixers and beyond, Tascam has redefined audio production at all levels – from the home enthusiast to high-end production facilities and leading installations around the world.

Tascam’s heritage dates back to the late 1960s when the Tani brothers, who were both engineers, and Dr Abe, a senior engineer at TEAC, formed a special R&D group named TASC (TEAC Audio Systems Corp.). TASC’s focus was to research ways to apply TEAC’s recording technology to musicians and recording studios.

In 1971, Tascam (TASC AMerica Corp.) was established to distribute TASC products in the USA and conduct additional market research. In 1974, Tascam was absorbed by the rapidly growing TEAC Corp. of America sales and distribution company, and Tascam became the official brand name of all TEAC recording products designed specifically for musicians and recording studios.

The Tascam name has a rich history in terms of its technological achievements and the artists and engineers who have used Tascam products.

For instance, the Tascam 80-8 tape deck was a half-inch, open-reel 8-track audio recorder and was used to record the voices of R2-D2 and C-3PO in the making of the first Star Wars movie, A New Hope, in 1977.

In more recent history, singer/songwriter/actress Lady Gaga‘s father gifted her a Portastudio when she was around 11 years old. Reflecting on the gift, she said, “I could just sit at the piano and hook up a mic and record by myself. That’s probably the best gift that my dad ever gave me.”

Tascam products have literally been used on tens of thousands of recordings and hundreds of gold and platinum records.

Throughout 2021, Tascam users and prospective customers will have much to look forward to. There are various promotions planned where music aficionados will have the opportunity to expand their equipment arsenals. Of course, Tascam will introduce new products in 2021 and beyond that address a wide range of applications.

From a musician who turns 50 this year to the maker of products that has helped start and shape so many musical careers, happy half-century Tascam!

Check out the special 50th-anniversary page on Tascam’s website for messages and special features.