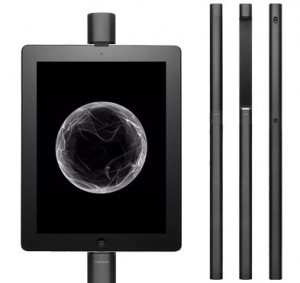 Yeah, iPad and iPhone docks generally do a decent job but how about owning a dock for your Apple tablet which wouldn’t look out of place in an art installation?

Tangram has produced a concept for one of the slickest iPad speaker docks I’ve seen thus far.

The Smart Mount is a slim cylindrical speaker with a docking port, as well as Bluetooth for wireless sound streaming (and when Apple change its dock ports).

So far, so iThing dock I guess.

But, the Korean designers also have and accompanying app which, when installed on your iPad , will produce animated ambient artwork while your music is playing.

Mount the unit on the wall and you have your own interactive art installation started. Gawjus dahling!

It’s still a concept at the moment but checking out the Tangram website I can see that they already make bits and bobs for the iPhone so, here’s hoping.

Could you see one in your room? Let me know.