The tablet generation – how to choose the right tablet 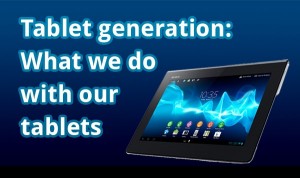 I was a huge tablet sceptic when these slates first landed. Why would I want a huge smartphone without the function to call? Why would I have a tablet which uses a mobile operating system when I can have a fully loaded laptop? But, more recently, things are changing – as is my point of view.

It’s time to face the inevitability of me eventually welcoming a tablet in to my life. These touchscreen slabs of computer tech are increasingly playing a critical role in travel, leisure, second screen and productivity computing.

Tablet PCs offer portability on a whole new level, and no matter how slim laptops get, tablets will always be thinner and quicker to activate.

Not only can you browse the internet, access your e-mail, watch your favourite movies and videos, play games, read the latest e-books, chat to your friends on Facebook, with tablets like the Xperia™ Tablet> you can even use it as a flashy control centre which commands your TV, Blu-ray Disc player, HiFi system and even your cable box!

The tablet is less than five years old and has already become a trusted companion on the commute and on the couch, from boardroom to bedroom. The touch technology, computing power and extreme portability has pretty much killed off the Netbook in a very short time.

More than 71 million people own a tablet in the U.S. alone, according to the Online Publishers Association. One in 10 around the world will own them by 2016. In other words, it’s no longer if you’re going to buy a tablet, it’s more of when and which tablet.

There’s plenty of choice out there in the tabletsphere but, if you break it down into some essential questions, you should come up with a manageable shortlist as to which tablet will be best suited to your needs.

This will probably cut down most people’s choices these days. But, saying that, tablets range in price from under £150 to over £800.

What might surprise you is that functionality in the mid-range doesn’t really differ that much. You’ll be mostly be paying for things like size, weight (or rather, the lack of), screen resolution, storage space, and so on.

If your budget isn’t so constricted, then you can make your choice based on some other factors.

Now it’s time to put some thought in to what you’re going to use your tablet for. Reading? Surfing the interwebs? Currently tablet owners spend much of their time viewing video, according to statistics, and it’s likely you will too.

Tablets are, by design, perfect content-consumption devices (that’s what most seem to use it for looking at the chart below), and they’re also great for web browsing, e-mail and getting your daily news fix.

What you want to do with the tablet could also help define your size selection. Readers may gravitate toward smaller 7-inch devices. TV and video watchers, as well as those who plan on getting more done with their tablets may opt for a screen in the 8.9-to-10.6-inch range. Virtual keyboards are a lot easier to use when you can fit both hands, side-by-side over them.

If you’re a gamer, you’ll not only want a larger tablet — you’ll want to look for a slate with ample graphics-processing power.

Regardless of size, today’s tablets ably perform a vast array of tasks. In other words, you won’t sacrifice much of anything if you choose a 7-incher over a 9.7-inch device. That said, larger tablets are heavier (mostly due to having to have a heftier battery to light up that larger screen), take up more room in your bag and put a bigger strain on your arm.

One thing can be said about the larger manufacturers, such as Sony, is that they do seem to pay a lot of attention on the design of their products. Just check out the Xperia™ Tablet to see what I am talking about. You’re unlikely to get that level of design and build quality from a budget slate.

Virtually every decent tablet on the market today offers an HD screen but if you go to some of the dedicated e-Readers then the resolution starts to get a little less pixel-packed. But, for just reading text, they still do the job. It’s back to what you plan to use your tablet for. As 54% will use their tablet for video, then chances are you’d be looking at the HD end.

If you are one of the 54% that will be watching films, and it’s practically guaranteed that you’ll be adding apps (96% according to the infographic) then you’ll need space to store everything. I’d recommend at least 16 GB to get things started. Be warned though as not all tablets will allow you to expand its memory via an SD card like the Xperia™ Tablet, for example. So, if you think that 16GB of memory might get gobbled up quickly with music, films and apps then either save up a bit longer or look out for a tablet which has an SD card slot.

Would you really take a photo with a tablet? Some do, but I would imagine that the most useful camera on a tablet is the front-facing lens designed for video calls.

Saying that though, there a huge range of tablets with an equally wide array of cameras meant for taking a quick snap – it’s for you to decide if having a many megapixel camera on the rear of your tablet is a deal breaker or not.

All tablets offer Wi-Fi and, usually for a bit more dosh, you can generally add 3G, or even 4G LTE connectivity so that you’re always hooked up to the net. Remember though, just as with your smartphone, you have to pay for those monthly data fees. If you plan on using the tablet mostly in a Wi-Fi saturated home, school or the local coffee shop, save yourself a chunk of money and skip the cell option.

I am convinced that once you know what you are going to use your slab of tech for, and have a budget in mind, that the current minefield of tablet purchasing will become less daunting.

It may be attractive to jump on one of the flavours of the month, or the cheapest you find but, like any tech purchase, it’s always best to do some homework.