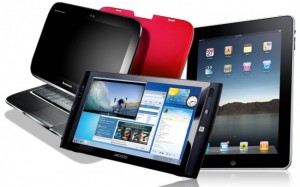 If you’ve looked around and thought that the amount of tablets being used seems to have increased in the last year – you’d be right, according to a recent study.

Strong growth in tablet sales is helping to drive overall growth in the global smart connected device market, according to analyst IDC. The new report covers the entirety of 2012 with projections through to 2017.

The analyst notes that market expansion last year was “largely driven” by the 78.4% year-over-year growth in tablet shipments — which exceeded a ginormous 128 million units.

IDC reckons that tablet shipments will blaze past desktop PCs this year, and portable PCs in 2014

There’s little question as to whether the market for tablets is exploding or not – but this has had the knock-on effect of the market share for desktop and portable PCs (laptops, Ultrabooks, etc.) dropping by 4.1% and 3.4%, respectively. IDC predicts the desktop market will drop another 4.3% this year, while laptops are expected to stay relatively flat at a growth rate of just 0.9%. I wonder if they’ll start to include Smart TVs and connected consoles at some point.

It will be of no real surprise to see that the real powerhouse in the growth charts is expected to be the smartphone which is projected to grow by triple-digits (109.9%) and nab a 67% share of the market.

You could be mistaken in to thinking that this is the final nail in the coffin for your desktop puter. True, IDC sees the overall market share for PCs declining, but shipments will still increase, if only by a little. In other words, the demand for PCs isn’t dying down—it’s just that the thirst for mobile devices is exploding. 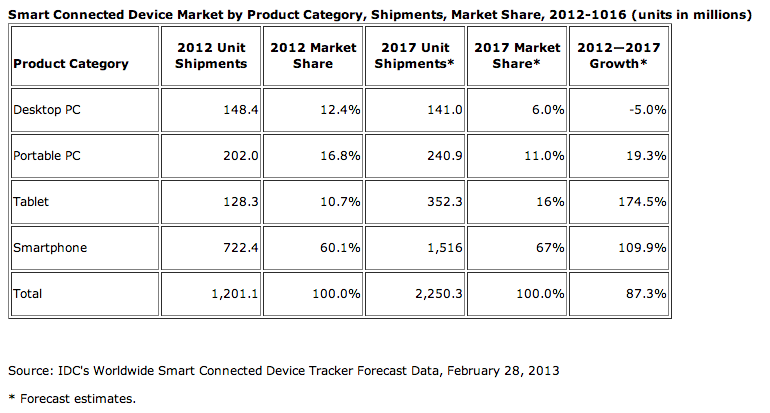 This year IDC said it expects the tablet market to reach “a new high” of 190 million shipment units, with year-on-year growth of 48.7%, while the smartphone market is expected to grow 27.2% to 918.5 million units.

“Consumers and business buyers are now starting to see smartphones, tablets, and PCs as a single continuum of connected devices separated primarily by screen size,” said Bob O’Donnell, IDC Program Vice President for Clients and Displays, in a statement. “Each of these devices is primarily used for data applications and different individuals choose different sets of screen sizes in order to fit their unique needs. These kinds of developments are creating exciting new opportunities that will continue to drive the smart connected devices market forward in a positive way.”

As well as a larger choice of these connected devices being available, a larger diversity of places to buy them is becoming apparent.

No longer are tablets only to be found bundled in specialist computer and tech stores – you can now pick up tablets at Argos on the high street. Whilst there, you could even grab Microsoft Office via the “laminated book of dreams”.

As tablets become more refined, useful and available do you see a time where laptops, or ‘portable PCs’ will disappear or will there always be a need for them? Is a tablet, such as the Surface Pro, enough to entice you away from your Ultrabook?