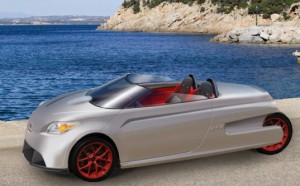 T3 Motion has been promising a high tech three-wheeler and taunting all that dare to look with computer-generated pics of its planned electric trike – complete with iPad powered dash – for well over a year now.

Well, concept car fans, it looks like T3 Motion are ready to make good its promise and all you need to fork out is $500 to earmark your technotrike now!

Looking at the video (below) and press release all looks as promised – the only major change between the concept R3’s and the real world version appears to be the change of tablet. Apple fan boys and girls look away now….

Yup, that in-dash iPad has been replaced with an Android touting Samsung Galaxy Tab!

T3 Motion claims that the R3 three-wheeled electric vehicle will have a range of between 80 and 100 miles, a top speed of 70MPH, and that it will be classified as a motorcycle – cheaper to ride into the cities that have things like the wonderful congestion charge 😉

It does look cool (but then I’ve always had a soft spot for the Grinnall Scorpion) and you’ll get a number of bike-based benefits with car comfort and an eco-friendly ride but… $25,000 – $35,000 aint cheap in anyone’s book is it?

You should be able to get your T3 Motion R3 in the next few months.

Can I have a ride?