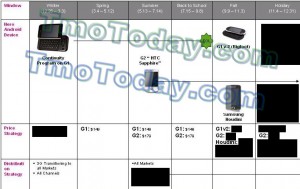 Now, I reckon that it’s safe to assume that the particular beast in question is the T-Mobile G1 Bigfoot, discovered in leaked documents by TmoToday.

The phone is also going under the title of G1 v.2 so more of a refresh than a new model.

Bigfoot loses the Big Chin of the original and looksÂ more rounded and packs a centralised keyboard.

It actually looks slimmer than the original, but still manages to keep that slide-out keyboard – a bonus for those who, like Taiwan Brown, say “no keyboard no buy”.Â

But if you wanna drop the slidey out keyboard then there’s still the HTC Magic.

There’s no real details about spec but as I said – this is more of a refresh so you may get a betterÂ screen and praps camera.

The T-Mobile G1 Bigfoot is listed for an autumn launch (more likely in time for crimbo), at least for the US so it’s fair to say that the UK may get it around the same time.