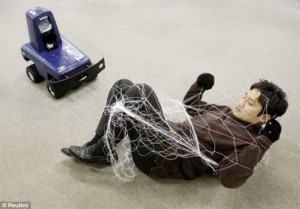 What ever you do – don’t laugh at this little droid.

Ok, so it might look like a radio-controlled car with an upright shoe-box plonked on it but the Alacom/tmsuk T-34 security botÂ  will take you down!

The T-34 is essentially a remote-controlled security drone operative 🙂

It can be controlledÂ by mobile phone if the human wants.Â  The droid can canter around at a respectable 6mph whilstÂ sending visual data to its remote pilot.

This data is kind of the point of the T-34, as it is intended to be deployed in situations where a security system alerts.

Kind of first call response but on wheels…

But that isn’t where the T-34’s skills stop.

The pluckyÂ T-34 willÂ cover you in a net in a Spiderman stylee if you don’t hit the deck.

Granted – even I can out-run a 6mph remote-controlled car……but then this is only the first step….