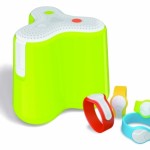 We have got used to any new gaming machineÂ being released to a fan-fare and dancing girls and perhaps huge queues outside major stores – that is not the wayÂ Dutch company, Swinx, rolls.

On release now isÂ “a title rich gaming machine with a traditional twist” that happens to be made by a Nokia designer.

Players wear one of the wristbands each and then select one of the many games inside which include trad-faves such asÂ tag, hide and seek and musical chairs and then listen as the speaking console explains the rules and becomes the referee.

Playing indoors or outside (really!?! playing outside could happen once more! OMG!)Â up to ten players can communicate with the console, and in addition to the ten pre-loaded games owners can log onto their website to download new titles for free as they become available.

One of the inventors, Eduard Zanen,Â announced thatÂ â€œSwinxs is the perfect marriage of traditional games and technology, both of which kids love, Its both physical and creative, safe and even educational which appeals to us parentsâ€.