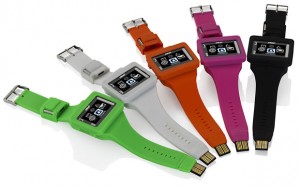 Now I’ve mentioned the sWaP range before and even wrote about the Rebel watch phone; the good news for those that have been aching to wear the sWaP Rebel in the UK you are able to grab one now!

The sWaP Rebel could be mistaken for an iPod Nano on a wrist-strap but the Rebel can do more than play your tunes.

You see, the Rebel is a fully functioning smartphone that you just happen to wear on your wrist!

You can get the Rebel in green, white, black, pink and orange and apart from the selection of garish colours the sWaP Rebel is rocking a 1.5-inch, colour touchscreen, with a 176×132-pixel resolution.

The wrist-phone even has a built-in camera which can capture video as well as spytastic stills but don’t expect marvels. Those snaps are only grabbed at 640×480 pixels. The phone also includes Bluetooth connectivity so you can pair it with headset just in case you were never a fan of Dick Tracy.

There’s a USB port for data transfer, and the watch supports microSD cards of up to 8GB.

You can store and playback films and music and the watch-phone will even push the sounds out via a built-in speaker but, again, I’d suggest using that headset.