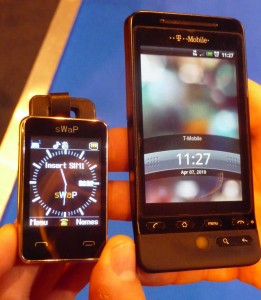 You may recall the sWaP wristphone from last year.

Well, the company has been busy building and shrinking more phone tech in order for it to be wrist-mounted – and in the process have shrunk it so far as to become a key fob.

I managed to get some hands-on time with the new range whilst at the Birmingham NEC.

The original model, now dubbed Classic, is joined by the retro looking Rebel. The upmarket unibodied milled steel Signature model looks impressive and would definitely suit those that have a hankering to be a double-O agent. The Signature also comes in a rather snazzy presentation box.

The bracelet designed Incognito is squarely aimed at the ladies and has the feel of something futuristic.

All of these wristphones work well and in the demo’s were very usable and come with Bluetooth headsets for when the novelty of talking to your cuffs wears thin.

Ultra-new on the sWaP stand at The Gadget Show Live was the tiny Nova. So fresh is this newcomer the stand only had the one-off hand built version that they flew in that morning.

The sWaP Nova Keychain Phone is a 2G (GSM/GPRS) handset and is smaller than a box of matches (just check out the pics). It, like the rest of the rage, comes unlocked and will work with all the networks except Three.

Like its wrist bound stablemates it comes with a stylus, microSD slot and has the benefit of a recessed direct connect USB plug.

You can either hang it round your neck via a lanyard or keep it with your keys – I did suggest making the attached loop a little longer so that ladies could slip it over their wrists.

Unlike the other sWaPs you’ll have to purchase a Bluetooth headset should you want one.

I think the Nova would work great as a ‘going out’ phone. You know, for when you’re dressed up but don’t want to carry around a lot of bulky gear. There’s no room in your purse or pockets for that large smartphone so you slip your SIM into this tiny phone, attach it to your house key and you’re good to go.

The Nova will be out later this year and will cost you around Â£199.