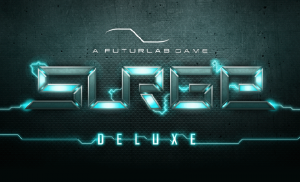 After blowing minds and taking names with Velocity Ultra, FuturLab return to the Vita with your latest addiction in the form of Surge Deluxe. If it sounds familiar, it’s because like Velocity Ultra, Surge was previously a PS Mobile game and has now received the full upgrade treatment.

It’s widely acknowledged that FuturLab are ridiculously good at what they do and for very good reason too, which in turn puts FuturLab in the position of having to strive for perfection in pretty much everything they do.

FuturLab have a very distinct style and it would be noticed if they let it slip. Not in the crisp visuals or the amazing soundtracks, but more in the fact that their games give you a unique feeling and you’d notice if it wasn’t there. FuturLab are more than up to the challenge however, and that’s no better showcased in the fact that their PS Mobile games are better than most fully fledged Vita releases, and their fully fledged Vita releases are better than, well everything really.

In Surge Deluxe, you need to connect blocks of the same colour to each other via an electric current. The higher the amount of blocks you connect, the higher your score will be and the less littered the screen will be. You don’t have time to dawdle either, as you need to clear the screen before a pressure gauge explodes, otherwise you’ll be on the Game Over screen. The colours are vibrant and the music is excellent but beneath the illuminating visuals is a game with way more depth than is assumed at first glance. The game becomes a frantic rush to get as many points as you can on your journey of levelling up and the panic seriously starts to set in.

There are a whole host of techniques to up your score. For example, if you chain 3 or more blocks together you can add more time to the timer bar. Star blocks are worth double points. X2 blocks double all points in the current chain and X3 will triple points. Bomb blocks enable you to detonate all blocks of the colour you connect to. There’s a lot to keep track of.

The coolest thing for me though is the frenzy block. Connect a colour block to the frenzy block and it will change every block to the same colour, meaning you can very quickly get a crazy, easy combo which lights up the whole screen. It’s awesome and you’ll be excited every time one of them pops up, swiping your finger quicker than if you were checking a scratch on your car door. Words of encouragement will accompany you with every combo too, ranging from Nice! Awesome! Superb! and if you really nail it, Cyborg!

As mentioned before, there are a whole host of strategies here and I’m not going to pretend to have discovered them all. Despite constantly playing it and loving it, I’m not a master yet. The cleverness of Surge Deluxe though is that anyone can play. On the flipside, hardcore gamers who perfect their craft will be rewarded more abundantly. Gamers can also test their skills against their friends scores in Puzzle Mode, comparing who gets the fastest clearance times.

I appear to be getting absolutely trounced by Lizard, so I have some serious work to do. Another really nice touch here is that despite being beautiful in its array of colour, the game has been adapted to be 100% colour blind friendly, achieved by making every colour block a different shape. It shows that FuturLab are constantly caring about their audience and thinking about enjoyment for gamers from all different angles. It’s just one of many reasons as to why you should buy Surge Deluxe.

With Surge Deluxe, FuturLab have thrown a birthday party for your eyes. The forthcoming Velocity 2X may be this year’s main event, but Surge Deluxe is a frantic, sophisticated, compelling addition to Futurlab’s already stunning catalogue that will more than galvanise your PS Vita in the meantime.