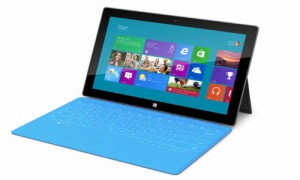 Nvidia took the wraps off its new Tegra K1 64-bit processor at the 2014 Consumer Electronics Show in Las Vegas last week and it looks like it might be heading to Microsoft’s Surface tablet.

The rumour was ignited by @MSFTnerd who tweeted that Microsoft is looking at using the new chipset in its Surface 3 tablet.

Microsoft is widely expected to unveil the Surface 3 later this year which sits right as It launched the Surface 2 in October 2013.

Microsoft uses Nvidia’s current generation mobile Tegra chipset in its Surface 2 tablet. It make sense that the company would stick with Nvidia for the next version of its Windows 8 tablet.

@MSFTnerd also tweeted an update about the much anticipated arrival of the Microsoft Surface Mini.

The Surface Mini is said to arrive before the Surface 3 and come loaded with 4G LTE – with the Surface 2 receiving the feature at the same time.

It is unclear if the Surface Mini will come with Windows 8, or whether the company will choose to debut Windows 9 on the newest tablet to the range.

If it chooses to stick with Windows 8, it could mean we see the Surface Mini before the end of March.

Would you go Mini or wait for the full-size Surface 3 to land?