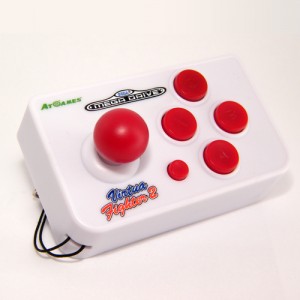 Looking at all the 16 bit games now appearing as smartphone apps it’s obvious that the appeal of these arcade classics hasn’t been lost.

If you remember the Sega MegaDrive and the size of the console and the cartridges then you may be as amazed as I was when I tried out a tiny little joystick keyring that only measures 70 x 43 x 20mm.

This funky keyring not only shows your love for the 16 bit era but also contains 10 classic Sega games!!

Yup – you actually use that keyring to plug and play via a microUSB which splits to analogue AV.

The keyring is powered by the supplied AAA battery and you also get that cable in the blister pack as well.

The controls are reasonably responsive (I still kick ass at Virtua Fighter 2) and if I got this as a stocking filler or in the Russian roulette that is the office Secret Santa I’d be happy.