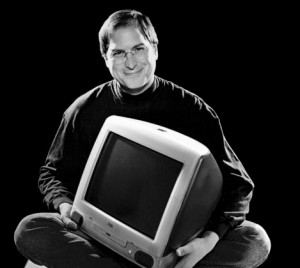 I knew something was going on this morning. The fact that it’s the first anniversary of the passing of Steve Jobs seems to have been the reason for the earlier outage.

A year on from the death of Apple’s entrepreneur a video tribute and a message from Tim Cook, the current CEO of Apple, has replaced the usual homepage of the Apple site.

The video, which features black and white stills and key sound bites of iSteve from Apple launches through the years plays automatically when you land at Apple.com today, Friday October 5th.

At the end of the video a written message from Tim Cook praises Jobs and remembers his efforts in making the company what it has become today.

“Steve’s passing one year ago today was a said and difficult time for all of us. I hope that today everyone will reflect on his extraordinary life and the many ways he made the world a better place,” starts the note from Cook.

“One of the greatest gifts Steve gave to the worlds is Apple. No company has ever inspired such creativity or set such high standards for itself. Our values originated from Steve and his spirit will forever be the foundation of Apple. We share the great privilege and responsibility of carrying his legacy into the future.”

Ending with a look to the future:

“I’m incredibly proud of the work we are doing, delivering products that our customers love and dreaming up new ones that will delight them down the road. It’s a wonderful tribute to Steve’s memory and everything that he stood for. Tim.”

While the rest of the site is still functioning, there are no other details on the homepage other than this fitting tribute to a man who, in no small way, changed the consumer tech world.