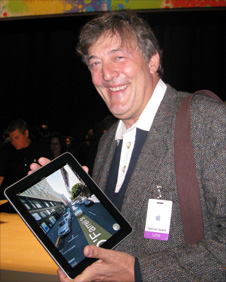 This is what the iPad has been screaming out for!

The new app is planned to appear at the same time that the iPad should in the UK – this Friday, May 28th.

Mr Fry managed to grab himself a pre-release iPad and has since been shifting his blog archive from the wonderful StephenFry.com onto an iPad application that will be free to download.

The first version of the app will feature Stephen’s blogs and then will be updated to include podcast and video archives. The app will also be the first to use the Share Deck technology that allows users to easily share articles on Facebook, Twitter and via email.

The app is more like a glossy magazine or graphic novel as you’ll swipe from right to left in order to turn pages, rather than the conventional up and down scrolling action.

He seems to have been firmly bitten by the app bug as the Gadgety Fry will also be adding his ‘Stephen Fry’s Sound Circus’ which shall boot on both iPad and iPhone.

This app will cost a quid and is a collection of Fry’s most popular quotes and ‘sound effects’ from the last 20-years or so.

Who wouldn’t want Mr Fry in their trouser pocket?