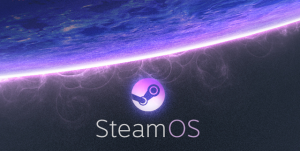 Valve’s SteamOS, the mould-breaking free gaming platform for PCs is almost here! With the first Steam Machine prototypes for beta testers shipping tomorrow – we’ll all be able to download the gaming operating system as a consolation prize.

Is it time to move the computer out of the spare room/office and next to the telly?

You could be forgiven if the next-generation in gaming is all about the PS4 and Xbox One but the PC refuses to be locked out of this party.

Valve, the studio behind Half-Life, Portal and the Steam game download service, wants in on the living room too. Its Steam Machines, gaming PCs designed to run quietly by the TV are part of the plan, as are its clever new Steam controllers and Linux-based Windows rival SteamOS – and the latter piece of the puzzle falls into place tomorrow.

Writing on the company blog this week, Valve’s Greg Coomer reveals that SteamOS will be available to download from Friday the 13th of December.

Before getting giddy with excitement, you’d better get ready with your coding chops as this won’t be absolute beginners. As the following warning outlines:

“Unless you’re an intrepid Linux hacker already, we’re going to recommend that you wait until later in 2014 to try it out”

What this does mean, however, is that coders will be able to dig in, find out its secrets – and start prepping their own games for the platform.

Better still, the “in-home streaming beta [is set] to begin soon, too”, so you’ll be able to stream Windows games wirelessly to your SteamOS machine in the living room – which should help the bridge the gap as developers work to port their games over to Linux.

Will you be trying out SteamOS tomorrow? Is it the future of gaming? Tell us what you think of Valve’s plans in the comments below.