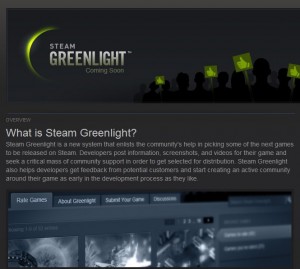 Many of you PC-users out there probably use the wonderful gaming portal known as Steam. The growing gamer online community has just been given some extra powers – we all now have a say as to which games are released!

When you look at all the games available through Steam it’s hard to believe that some actually don’t make it on to the Steam Network but, apparently, there’s a very selective process to go through before it hits the download pipes.

At the moment, when a game is put forward to be launched and made available through the Steam network, a panel of people get the tough job of deciding which ones get let through.

Not only do these people have to choose which games the millions of Steam users get to play – I can only imagine how many games they have to get through.

Valve has now decided to put the power in the gamers hands with their new Greenlight service.

Greenlight is a system that allows you to browse through new titles that are awaiting approval on the Steam network – then you can vote for the game you want to become available.

“With the introduction of the Steam Workshop in October 2011, we established a flexible system within Steam that organizes content and lets customers rate and leave feedback. This opened up a new opportunity to enlist the community’s help as we grow Steam and, hopefully, increase the volume and quality of creative submissions.

We know there is still a lot of room for improvement in making Steam distribution easier and faster; this is just a first step in that direction”.

Who better to make these tricky decisions than the end user?

So from the end of August we will all begin to have our say in what we want to play!