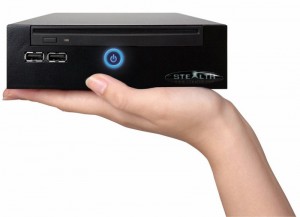 Stealth have been quite quiet since the release of their tiny LPC-350PCI PC over a year ago.

But now they return with the even tinier LPC-650.

Its packing a gigabit Ethernet, a slot-loading optical drive, optional SSD, WiFi, 1GB of DDR2 RAM and, given its diminutive proportions, a rather respectable array of ports including twin USB 2.0 jacks, HDMI, audio in/out and a RS-232 socket.

As with most tech, the smaller it is the bigger the price.

So, for this space-saving PC look to be forking out $1,595 and upwards.