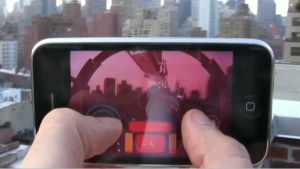 What more do you need?

Vertigore Games have just released a video of their upcoming title for the iPhone and iPod Touch – Star Wars: Falcon Gunner.

As the name suggests, you take the hot seat, as sat in by Luke Skywalker, in the Falcon taking out the bad guys but with the added bonus of you being able to chose the backdrop. Â Just don’t get cocky kid!

Even better than that – should you get the urge for shooting at TIE Fighters that are flying around your living room – you got it. Bringing down Star Destroyers flying through the park – alright! This is all thanks to the augmented reality mode, which uses your camera to bring the Empire to your living room.

You can also play the 20+ levels in normal mode that features stunning HD graphics.

Have a glance at the earlier version in the video below: