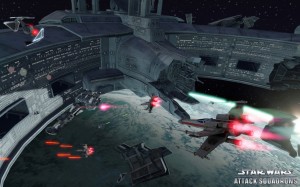 The title sees players piloting classic Star Wars vehicles like the X-Wing and TIE Interceptor in online battles.The game will support fisticuffs between up to 16 players.

The initial game modes include free-for-all, team dogfight, and base defense.

Fans have a number of spaceships from the series to play with. These are all customisable, which probably explains the non-regulation livery of the X-Wings and TIE fighters in the trailer.

The official website also promises new ships, items and upgrades each month – I’m not sure if the Corellian Corvettes and Imperial Star Destroyers seen in the video below are playable though.

Attack Squadrons is free-to-play so players will probably be enticed to spend their hard-earned to enhance their progression and buy goodies for their craft.

The game is being developed by new Seattle-based studio Area 52 Games and you can sign up for the beta, which launches in the New Year, on the official website.