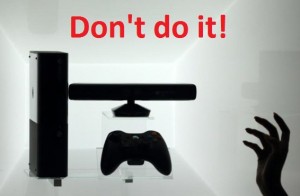 Are you ready to refresh the space currently taken by your Xbox 360 with the new, shiny Xbox One? Make sure you’re not planning to stand the new console up like your current one.

You see, the space required for the next gen console has to be purely a horizontal affair as, unlike the Xbox 360, the new Xbox One console has not been designed to support being stood vertically.

Apparently, this is due to its slot loading disk drive.

If you do decide to try it out, Microsoft says you do so at your own risk and that the vertical orientation could damage the Xbox One.

So, there you have it. consider yourself warned.

Has its choice of orientation put you off?