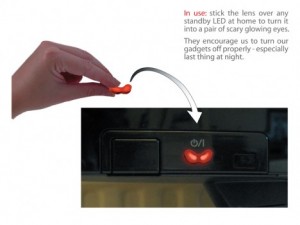 There’s plenty of ways in which we can cut down our power-usage; the most obvious is turning off our tech.

I don’t mean ‘put on stand-by’ but actually turn it off!

I found the Standby MonsterÂ viaÂ Cutie Gadget and would get some for me (although mainly to shove over the LEDs on my band gear 😉 ).

Inspired by the fear of that monster,Â you know, that lurksÂ in the dark and/or under your bed.

Just stick it over the standby light and you’re left with evil eyes glaring at you when you turn off your lights before going to bed.

Will you be able to sleep soundly knowing that there’s a bunch of eyes glowing away around your abode?

Hopefully this will force you to turn off those evil eyes via the wall socket.

Standby Monster is of courseÂ made from recycled materials. 🙂