Spyder III Laser Attacked by George Lucas – Remove it You Must 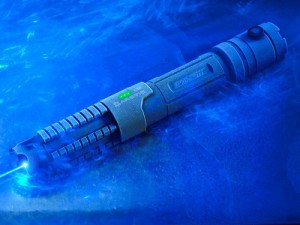 Wicked Lasers have constructed a real powerful light sword by utilising the blue-laser diode of a dismantled Casio projector.

Yup, for $200 you can own a Spyder III Pro Arctic portable laser that can actually cause blindness and set you, and anything else for that matter, on fire practically instantly!

This isn’t something to re-enact your favourite sci-fi scenes with – it does seem to be quite dangerous if not taken seriously.

Wicked Lasers actually bundle in a pair of safety glasses with the purchase of a Spyder III.

You may have noticed that I have not once mentioned what it obviously looks like and acts similar to.

SAN FRANCISCOâ€”(EON: Enhanced Online News)â€”Earlier this week, Wicked Lasers released photos and information regarding the “Pro Arctic Laser,” a product designed to resemble the famous lightsaber hilt from the Star Wars Saga. Described by Wicked Lasers as “the most dangerous laser ever created,” the product description goes on to say that “extremely dangerous is an understatement.”

“It has come to our attention that a company called Wicked Lasers is selling a highly dangerous product out of Hong Kong that is designed to look like a lightsaber from Star Wars. This product is not licensed or approved by Lucasfilm in any way. We have demanded that Wicked Lasers immediately cease and desist their infringing activities. As Wicked Lasers itself admits, this product can cause serious injury to the user and other people. We strongly discourage consumers from purchasing it.”

Granted, Wicked Lasers does not refer to lightsabers or Star Wars anywhere on their site from what I can see but I guess anyone with eyes can see the similarity and the fact that it is, for all intents and purposes, something that only a Jedi should be trusted with.

Check out the Spyder III in action below.