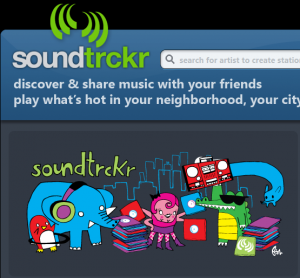 But, how about getting recommendations from people near-by?

Soundtrckr actually launched a few months ago but has gone really official just recently. You can get Soundtrckr on your puter, iPhone / iPod touch, Windows Phone 7, Google Chrome and Nokia.

Pop Soundtrkr on your iPhone and you get access to 10 million songs from indie and major labels, as well as the ability to interact with friends! You get to chat in-app, share music on Facebook, Twitter and Foursquare, as well as check out stations created by people near where you are at that point in time. So, quirky indie in Shoreditch, Emo/Goth/Punk/Metal in Camden, Reggae/R&B in Brixton, Bangra in Brick Lane and Gangsta rap in Pekham then 😉

Unfortunately, at the moment anyhow, you don’t get on-demand listening or offline caching but this still a fun way to discover new music though.

The service will soon be available in eight languages, as well as on Android, BlackBerry PlayBook and the HP TouchPad.