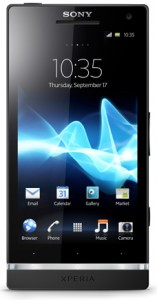 I got a lovely little email this morning from Sony who were proudly announcing their first new smartphone since it acquired complete control of the Sony Ericsson brand. Welcome to the stage the Sony Xperia S!

The Sony Xperia S will arrive in the spring courtesy of the newly formed Sony Mobile Communications company.

The Sony Xperia S will land in the UK as an Android 2.3 device but will soon be bumped up to Ice Cream Sandwich.

Sony says the design is “iconic” and “minimalist” (read quite a lot like an iPhone 4S) – I do dig the see-through panel at the bottom of the S though.

Sony’s “HD powerhouse” will come loaded with a 720p, 4.3-inch screen that comes loaded with Sony’s Bravia screen technology – this will make the new phone excellent for video watching and game playing.

The 12-megapixel camera is equipped with a super-fast shutter speed that promises to eliminate shot-to-shot lag – so, unlike most other cameraphones you should be able to snap consecutive pics easier.

If taking moving pictures with your phone is your thing then rejoice at having the choice to capture those moments in 1080p or 720p.

Powering all this is a 1.5GHz Qualcomm dual-core processor and 32GB built-in storage

Expect the Xperia S so have strong links with Sony Entertainment Network services such as Movies and Music Unlimited. This will put that 32GB memory to work with all that lovely content, that’s for sure!

Naturally the Xperia S is PlayStation Certified and so brings classic Sony PlayStation titles to your Android smartphone.

Three UK has announced it will be carrying the Sony Xperia S – I hope to get my paws on one as soon as possible!

Would you like to own an Xperia S? Let me know.