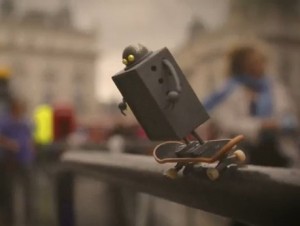 Sony has launched the Xperia Unleashed competition to help catch the thousands of ‘Xperiabots’ (the little robots from the Xperia TV ad) that have escaped from Sony Xperia devices in and around London and Manchester.

These renegade Xperiabots can be found in both physical, online and print forms across the UK, with location clues churned out by the ‘Leaderbot’ on the @xperiaunleashed Twitter account and #xperiaunleashed hashtag.

By scanning QR codes, tweeting pictures, entering unique codes to the Sony Facebook page and hunting for Xperiabots online you will get the chance to win one of thousands of Sony prizes on offer.

Winning is easy with prizes claimed simply by uploading the alpha numeric or QR codes seen on the Xperiabot to the Sony Facebook page.

The Xperiabots will also be infiltrating spaces online popping up where least expected for a game of ‘catch us if you can’!

I have had a tip-off that one or more may visit GadgetyNews soon! 😉

Remember: Other hints as to the location of the Xperiabots will shared via twitter by following the Leaderbot @xperiaunleashed and #xperiaunleashed as well as his dedicated section on Sony Mobile’s UK Facebook page.

Prizes on offer include:

Here’s a word from Leaderbot: