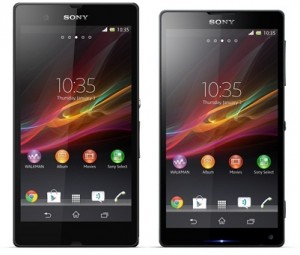 The Sony Xperia Z and Xperia ZL have had their press pics leaked a week before their official unveiling at CES 2013 next week.

These shots are the first good look at Sony’s 2013 flagship phone, the Xperia Z.

The Xperia Z packs a 5-inch 1080p screen powered by a quad-core processor and has been rumoured to be water and dust resistant and measure 139 x 71 x 7.9mm

The ZL is the slightly smaller phone pictured above but the screen-size appears to be the same as the Xperia Z.

I am guessing that the ZL will be a bit lighter on specs but make up for it in another area, perhaps it will pack 4G or something. Then again, it might not actually be for the UK market at all.

What is curious, however, is the positioning of the ZL’s front-facing camera – you can just make out that it is at the bottom right of the device. Who doesn’t enjoy seeing someone’s chin, after all?

There will be more info when these two new Sony’s appear at the Tuesday morning press conference at CES in Las Vegas which kicks off on Monday.