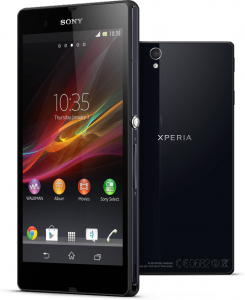 I’ve tested a few Sony smartphones here on GadgetyNews, the latest being James Bond’s Xperia T. I have to say that the Xperia Z actually feels in a different class. The tempered glass and minimalist construction of Sony’s Xperia Z looks classy – but is it a winner?

Sony certainly gets off on the right foot with the Xperia Z packing a quad-core Snapdragon S4 Pro chipset providing the grunt to the 1080p HD screen.

But, it’s going to need more moves than that if it’s going to compete with the likes of the Samsung Galaxy S4 and HTC One. Just as well it’s also equipped with a 13.1 megapixel camera matched to Sony’s Exmor RS sensor and has bragging rights to being dust and water resistant.

I am trying my hardest to avoid using the word slab, as it’s quite unflattering, but the Xperia Z literally is a slab – albeit a slab of loveliness.

It might be flat and right-angled but measuring just 139 x 71 x 7.9mm and tipping the scales at a slight 146g it will slip in to just about any jacket pocket without it weighing you down.

This also means that, despite the huge 5-inch display, this isn’t the exercise in hand-stretching you might expect. It isn’t tiny, don’t get me wrong, but thanks to that 7.9mm thickness, the Xperia Z is actually quite comfy to use, even without extendable fingers.

It’s quite an understated beauty, the Z. Clad in scratch and shatter-resistant glass and boasting protection from both dust and water ingress, this is a phone that mixes class with rugged dependability.

The main downside with that tempered glass is that it’s an absolute magnet for fingerprints, and as soon as I got it out of the box, it was covered in traces of where I’d touched it. Would-be criminals should avoid this phone as you’ll be leaving your fingerprints all over it.

Sony has long since embraced Google’s buttonless mandate for Android and the Xperia Z’s frontage remains unsullied by any kind of physical buttons, with the three Android commands – back, home and multi-tasking – appearing on the display itself.

Aside from the power button and volume rocker, there’s little else of note around the phone’s edges.

The Micro SIM slot, Micro SD card bay, headphone jack and charging port are all hidden behind tightly sealed panels – a necessity when you consider the phone’s advertised dust and water resistance. This boast only works if all those little flaps are shut. 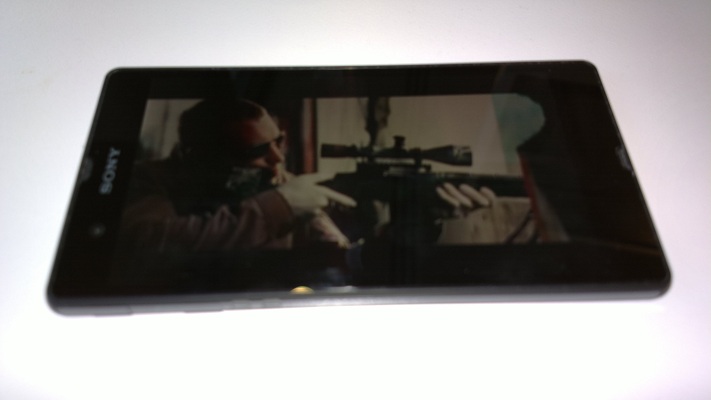 The Xperia Z’s 5-inch display rocks a resolution of 1920 x 1080 pixels and a pixel density of 441ppi – that’s way ahead of the iPhone 5 (326ppi) and the same as the Galaxy S4. Sony’s “Reality Display” technology delivers soft, natural colours but is not as in-your-face as a Super AMOLED panel.

Sony have decided to aim for warmth, and the clarity of the display means that everything from HD movies to 3D games looks crystal-clear and devoid of any unsightly pixels.

The shots you take, or the videos you capture, look great on the Xperia Z’s screen. Actually, everything looks pretty good on this screen.

Furthermore, you can switch on Sony’s mobile Bravia Engine 2 to add additional life to your images and make those plentiful pixels gleam. This gives the screen a highly impressive rich, colourful detail without ever being over-saturated. 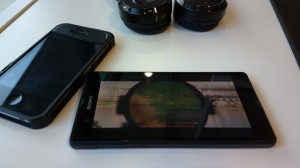 This is where the Xperia Z has to at least match its rivals.

The quad-core Snapdragon S4 Pro chipset is clocked at 1.5GHz – slower than the S4’s 1.9GHz Snapdragon 600 but, thankfully, in real-world usage terms, I never felt that the Z was lacking grunt.

Along with the quad-core processor there’s 2GB of RAM, 16GB internal storage, with a Micro SD card slot allowing up to 64GB more.

Gaming on the Xperia Z is pretty good with most titles, although some 3D games, when placed alongside the Galaxy S4 occasionally seemed a little less smooth in places – but not really noticeable in gameplay.

Sony’s Exmor RS, back-side illuminated, 13.1MP camera, that shoots at 4128 x 3096 pixels makes this one of the best-equipped smartphones when it comes to image capture – ignoring the mental Nokia 808 PureView.

Colour replication is excellent and the phone copes well even in low-light conditions, see the stormy, overcast shots below (click once to open then click again for full-sized).

Close up shots are also excellent, and the camera is able to produce detailed snaps even when using the LED flash in macro mode. 1080p HD video recording also makes the grade, and is similarly impressive.

The thing is, there’s no camera shutter button. It might seem like a minor niggle but, couldn’t they use the very well-made standby button on the side?

Apparently not. If you want a shutter button you’ll need to get the Sony Xperia ZL for that.

The screen also reminds you of its wow-factor again when using the camera.

The richness of the colours and the refresh rate as you move the phone around is very impressive.

I love the intelligent Superior Auto mode and it works really well. As you move the phone around to cue-up a shot the little orange mode display flicks to the optimum setting for the shot you want.

Yes, it actually seems to know what you are trying to do.

Taking the Smile detection a step further, the Sony Xperia Z enables you to choose between big smiles, average smiles or small smiles. An odd concept, but it’s there should you need it.

There’s the usual abundance of scene modes to pick from. Nothing particularly new – from Panorama to Burst Mode – but all things you’d expect to be there and moan if it wasn’t.

I did have a giggle using the Doodle option on the picture editor where you can free hand sketches on the photo you’ve just taken right there on the phone.

From its clean, attractive design to its striking screen and robust internal tech, the Xperia Z is undoubtedly one of the best phones Sony has created in a very long time.

With the Xperia Z, I also feel that Sony has finally found its identity in the mobile space. 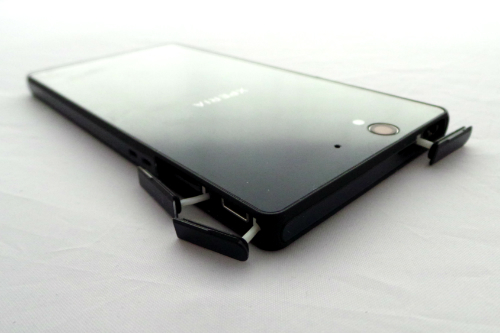 It’s all about timing, however, and the Xperia Z has landed in a market featuring the HTC One and the Galaxy S4 – the latter is sure to sell millions purely on the strength of its predecessors alone.

I’ve had the Vodafone-supplied Sony and Samsung sat side-by-side and tested them playing the same YouTube clips, etc and, although the Galaxy S4 trumps the Z on paper and in the overall popularity stakes, I still rather fancy the Xperia Z more.

The design of the Xperia Z is more appealing to me and I even prefer the Sony user interface. To me, HTC Sense remains the best Android skin out there at the moment.

True, battery life could be better, but the Xperia does have a ‘Stamina’ mode and the Z makes up for that with the excellent camera, and its resilience to dust and water as standard.

Am I ready to run out and buy a Sony Xperia Z? Not sure.

Am I excited to see what the next flagship Sony Xperia is like? Bring it on!