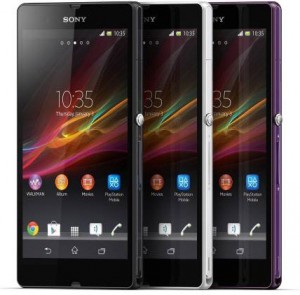 Sony has finally revealed the Sony Xperia Z, its latest flagship smartphone, at a press conference at CES.

We have all been waiting for Sony to officially unwrap the Xperia Z as we have all seen leaked photos and specs over the last number of weeks… and months.

That’s not to say that the specs aren’t worth reading though!

The 5-inch Xperia Z is powered by the Qualcomm Snapdragon S4 Pro chip and runs the latest version of Android – Jelly Bean.

It comes equipped with 16GB of storage and the option to expand its memory with a microSD card – something that most owners will do as that 5-inch Bravia screen is totally 1080p capable with a pixel resolution of 1920 x 1080.

As well as playback, the Xpreia Z is kitted out with great capturing kit too. It sports a 13MP rear-facing camera capable of 1080p video and a 2MP front-facing snapper that can deal with 720p video.

Sony is still supporting NFC and have made the Z dust and water resistant, to top it all off!

The handset will be offered by all the major UK networks, including the likes of Vodafone, O2 and EE, but so far a UK release date and prices are still hush-hush but March 1st has been mentioned by Phones 4 U.

Saying that though, Clove is, as usual, offering preorders for the SIM free version for £528.