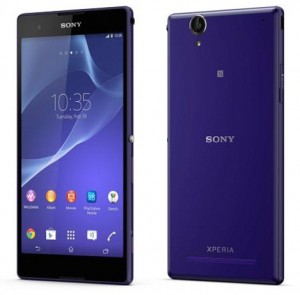 This morning, Sony added another Android smartphone to its Xperia range with the launch of the Sony Xperia T2 Ultra and T2 Ultra Dual.

The Sony Xperia T2 Ultra will be available in both single and dual SIM versions, the handset features a 6-inch high definition display with a resolution of 1280×720 pixels and look set to take on devices like the Huawei Ascend Mate and the Samsung Galaxy Mega 6.3. .

“Xperia T2 Ultra will lead the category through its combination of advanced display and camera technologies, it will bring large-screen entertainment in an amazingly portable form factor and it will do it all whilst providing incredible value for money,” said Calum MacDougall, Director of Xperia Marketing at Sony Mobile Communications. “Its large HD display will deliver big screen entertainment on the go whilst the efficiency of the design will allow it to remain the worlds most portable large screen smartphone.”

Addressing one of the criticisms of the Xperia Z1, Sony says that the screen reaches to within 2.5mm of the edge of the phone, as it tries to Terminate the bezel. Sorry, you really didn’t expect me to get through this without at least one Terminator nod did you?

The result is a handset that’s only 7.6mm thick and weighs 173g, impressive for a device of this size.

The T2 features a quad core 1.4GHz Qualcomm Snapdragon processor and comes with 1GB of RAM, there is also 8GB of built in storage.

Should you need additional storage, the Sony Xperia T2 Ultra, is also equipped with a microSD card slot that can take up to 32GB cards.

The Sony Xperia T2 Ultra is designed for emerging markets, and will be available in China, the Middle East, Africa and Asia.

There’s no pricing or firm release dates yet and no hints as whether we’ll get a sniff of the T2 over here in Blighty.