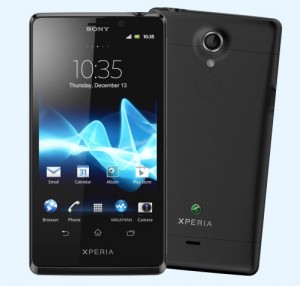 The Xperia T is the latest addition to Sony’s smartphone line and even Bond, James Bond, owns one. If it’s good enough for Jimmy B, it must be good. Mustn’t it?

The Sony Xperia T is equipped with a 4.6-inch HD screen, NFC capability, a dual-core 1.5GHz Snapdragon S4 processor and a 13 megapixel camera. Not a bad start.

The Xperia T has been handed some uprated specs when compared to the Xperia S, but they’re not coming from Q.

The T receives extra megapixels to its snapper and the CPU is a bit beefier but none of that is like shoving an ejector seat in to an Aston Martin. Let’s see how it will cope on Her Majesty’s Secret Service.

View to a kill

The design of the Xperia T would easily cut it at a formal dinner with its clean and unfussy lines. Boring, some might say, but I’m going with smartly reserved. It looks good and feels good and will slip easily inside your dinner jacket without ruining the lines as the T only weighs 139 grams.

The front of the phone is covered by scratch-proof glass, bordered by a black bezel with the back of the Sony Xperia T coated in matte textured plastic – you can have this finished in black or silver. The back also bends inwards, just like the T’s stable-mate, the Xperia Arc.

The lack of a glossy finish improves grip during those dangerous missions where things can get a little… errr… sweaty.

You’re not able to get in to the workings of the Xperia T, unless you have one of those pens that’s also a high powered laser, so there’s an access flap on the right-hand edge of the device. Flip it open and you get the slots for the micro-SIM and microSD card. As with all things of this nature, it feels a little flimsy when opened but, once you’ve clicked it back in, it sits flush with the chassis and you’d barely know it was there. How often do you need access to those cards anyway? 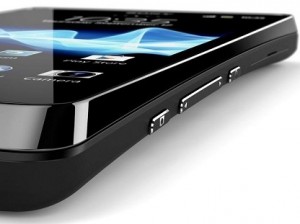 Along with the card flap you’ll also find the Power, Volume and Camera buttons on the right side. They’re also the only physical buttons on thee Xperia T.

Over on the left-hand side is the micro-USB charging port, which doubles as the HDMI-out socket, thanks to the savvy inclusion of MHL technology.

The only other thing to report on the body of the Xperia T is the 3.5mm headphone socket sat up on the top edge. My personal opinion is this is where a headphone jack should be – yeah, I know that Apple has moved their’s down to the bottom edge on the iPhone 5. But then, I think that real VWs should have their engines in the back – the new Beetle? That’s just a Golf in fancy dress!

For your eyes only

On the other Xperias I’ve tested the display has generally been the strong hand in Sony’s game and the T is no exception. Powered by Sony’s own Bravia Engine and sporting a near-iPhone pixel density of 323ppi, the Xperia T’s 4.6-inch TFT display packs a proper punch.

Sony is calling it the HD Reality Display, and really does make watching films on your phone a pleasure. 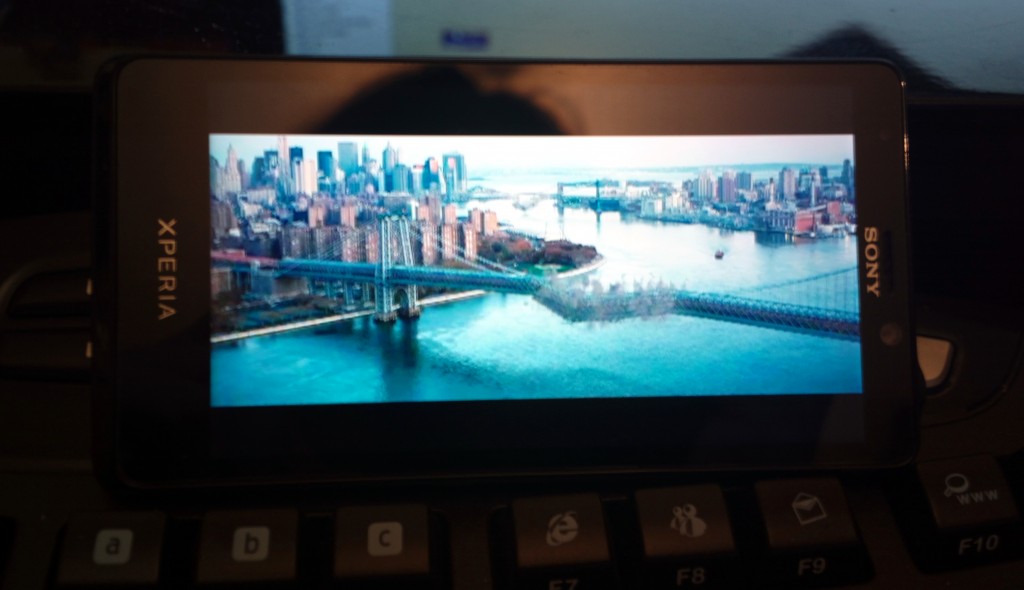 At the bottom of this natty screen is where you’ll find the trio of Google Android function buttons.

The Back, Home and Multi-tasking icons aren’t actually there at all. This is not down to a clever cloaking device but they are part of the display and vanish when the screen powers down.

The handy thing is that they reposition themselves depending on how you’re holding the phone. In landscape mode, they switch from side to side they will always appear on the right of the screen, regardless of whether the phone has been turned clockwise or anti-clockwise.

The world is not enough

It will keep up with the likes of the Samsung Galaxy S III and HTC One X (a personal favouite of mine) but, when pushed to the limits, you will see applications slowing down when the others would be sipping on a vodka Martini.

Saying that though, as you find your way around the Xperia T you’ll find that navigating Sony’s skinned Android Ice Cream Sandwich OS is as slick as a Connery one-liner.

The Xperia T also has the punch of a OO agent thanks to its 1GB of RAM which makes quick work of browsing and games.

There’s 16GB of on-board storage, which only has 2GB reserved for apps and games. Thankfully the Xperia T will accept microSD cards up to 32GB so there’ll be plenty of room to download stolen blueprints and photos of various top secret stuff.

You can hook the Xperia T up via Wi-Fi and Bluetooth as well as Near Field Communication. You can even customise NFC tags to automate aspects of your phone’s functionality. Perhaps Bond would have the curtains close automatically when he arrives back with a sexy ‘field agent’. 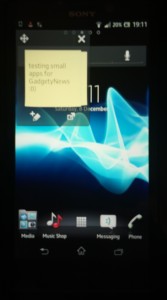 The Xperia T arrives with Android Ice Cream Sandwich but Sony promises that their smartphone will soon get an updated taste of Android 4.1 Jelly Bean. It’s the most up-to-date version of the operating system and offers even smoother performance, as well as Siri-beater Google Now.

Even though you have access to Google’s myriad offerings, Sony has also added all of its own too.

For example, you get Video Unlimited which sits there in direct competition with Google’s Play Movies. There’s Sony WisePilot for Xperia sat there with Google Maps and so on. The most confusing thing is that Sony’s Select store has moved in next door to Google’s superior Play marketplace – not only that, but when you pick an app or game to download, it merely transfers you to Google’s portal. All these extra bits takes up storage space which, for me, could be put to better use.

I do dig the new Small Apps system, which allows you to float interactive elements on top of the current screen. The ‘Small App’ will remain over the homescreen and any other normal app until it is removed. You access these from the multi-tasking menu – currently the apps are a post-it style notes app, a calculator, a timer and audio recorder.

View to a kill

Sony’s Exmor R Sensor continues to do the business, offering excellent sniper quality shots in both high and low-light.

I love the fact that you can swiftly launch the camera application using the physical camera button, and also use the very same key to focus (press half way) and take (full press), rather than having to rely solely on the touchscreen.

The front-facing camera has a resolution of 1.3 megapixels and can also record video at 720p resolution.

The rear camera is where you’ll find happy snappy-land. The 13MP sensor is also capable of capturing 1080p video. Auto-focus is generally decent and the camera manages to put up with rapid motion and shakiness. 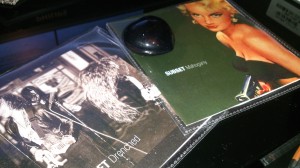 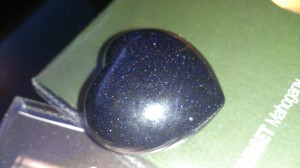 You only live twice

The Xperia T is equipped with a 4.6-inch screen and a needy processor so battery longevity is about the same as any premium smartphone.

Its 1,850mAh power cell will manage about a day on ‘normal use’ but start getting in to games and watching HD flicks then that can be severely slashed to around 5-6 hours.

Is there a quantum of solace to be had or is this a Dr No?

The Sony Xperia T is definitely good enough to become field issue for MI6’s elite and those coming from other devices or have just gained OO status will no doubt find many things about the Xperia T to Q up for (sorry).

Having said that, Sony has parachuted this phone behind the enemy lines of quad-core masterminds such as the Samsung Galaxy S III and HTC One X. Granted, the Xperia T’s dual-core Snapdragon S4 CPU is certainly up to the task but I just can’t help thinking that buyers will be swayed by the other phones larger screen and processors.

The Sony Xperia T is available Free from £37 p/m on the Vodafone network, on which I tested this phone.