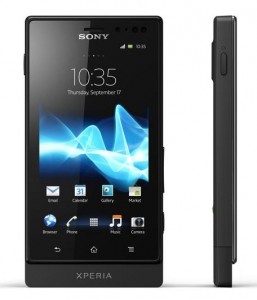 Another day – another smartphone from Sony. The thing is though, the Xperia Sola has a touchscreen that you don’t even have to touch!

Sony’s Xperia range appears to be growing on a daily basis and the Xperia Sola has spotted that there’s a gap for a 3.75-inch screened smarty in the lineup.

Having a different sized display isn’t enough to get in to this party though, it needs to bring something new – and the Sola does that with its Floating Touch tech.

Sitting nicely between the 3.5-inch Sony Xperia U and the 4-inch Sony Xperia P the Sola is powered by a 1GHz dual-core processor and, like its stablemates, runs Google Android 2.3 but with a promised update to 4.0 Ice Cream Sandwich arriving soon.

As well as the rather good Sony Reality Display you get the NFC cleverness which is used with Sony SmartTags and  xLOUD and 3D surround sound as seen, or rather heard, on the Xperia U.

The neatness starts with the BRAVIA-powered display. The Xperia Sola allows you to cycle through options without actually touching the display at all.

The ‘Floating Touch’ tech enables you to be able to navigate through tricky websites with small links by hovering your finger just above the screen so it acts like a moving curser. When you’ve selected the one you want give the screen a double-tap to click it.

Calum MacDougall, Head of Xperia Marketing for Sony Mobile Communications, commented; “Xperia sola comes with the power of Sony and a sense of magic with floating touch, giving consumers a fun new way to browse the web and latest technology to show off.”

It’s a funky solution to the problem of obscuring the display or pressing the wrong thing just because you have fingers with a fuller figure.

You have probably noticed that the Xperia Sola is also lacking the transparent strip, just like the Xperia Pepper I wrote about yesterday. This is because it’s the same phone – but is this going to be a mark of rank in the Xperia hierarchy?

Would you like to see the Floating Touch technology on the other Xperias?