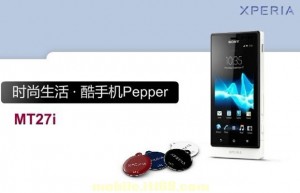 A leaked picture of the Sony Xperia Pepper has found its way out on to the interwebs. The new Neo.

The Sony Xperia Pepper, or MT27i if you want to get technical, has been rumoured before but now we know what it looks like – not only that, there’s even some specifications to go with the pretty picture.

The Xperia Pepper will be loaded with a 1GHz processor and sport a 3.7-inch screen which packs a resolution of 480×854-pixels.

On the back of this Android smartphone you’ll find a 5-megapixel camera and, thanks to the hefty SmartTag hint in the picture, it must have NFC powers.

So, it shares quite a lot with the Sony Mobile NXT range with it’s NFC tech and squared off bottom (stop sniggering at the back!) but it is lacking that transparent strip.

Do you think 5MP is enough? The Sony Xperia U is kitted out with a 5MP already but it can change the colour of its see-through strip to match what’s on screen.

I guess that Sony isn’t been drawn by Nokia and their humongous megapixel count featured on their PureView handset.