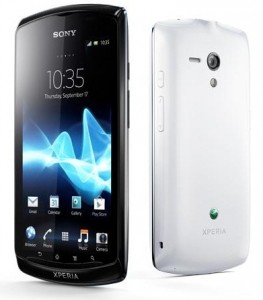 The Xperia Neo L, or MT25i to those a little more formal, is a step in the right direction for Sony.

The 4-inch screened Neo L is loaded with a 1GHz processor partnered with 512MB of RAM. There’s 1GB of built-in memory and a 5-megapixel camera around the back.

Not earth shattering specs but the inclusion of Ice Cream Sandwich is a huge deal for Sony!

While their recent handsets are very capable machines, the fact that they’re all making their appearances rocking Gingerbread (2.3.7) but the Neo L shows that Sony can do the Ice Cream Sandwich variety of the Google mobile OS.

The Neo L, which will be available in black or white looking at the picture, joins the rest of the new Xperia stable who have the joint responsibility of bringing Sony back in the game.

No pressure then for Sony Xperia S, Xperia U and Xperia P.

It’s also good to see Sony playing around with new tech – you have read about the Xperia Sola haven’t you? You know, the phone that lets you surf the web without even touching the screen?