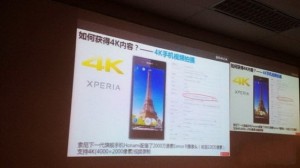 Thanks to a leaked presentation slide, it appears that the new Sony Honami (aka Xi1) Smartphone may well come equipped with ultra HD video recording features. Yup, the ability to capture 4K video on your phone!

The leaked slide was first spotted over on the Chinese social networking site Weibo, but now the original post which revealed the specifications for the new Sony Honami Smartphone, has now been deleted. Not before tech-hunters such as Engadget got it saved, though.

Sony has already suggested that they’ll release a 4K smartphone packing the 4K-ready Snapdragon 800 processor, so all this make sense.

You can see from the slide that the Sony Honami Smartphone will not only pack the 4K video capturing skills, but it will also be fitted with a 20-megapixel Exmor R rear camera sensor, together with a front facing 2.2-megapixel front facing camera designed for video chat.

Does this show a compromise for mobile 4K video or prove this to be fake?