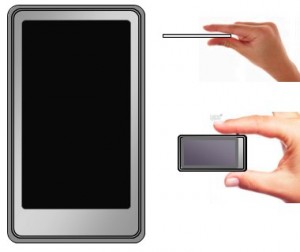 Sony’s Walkman series of media players has done its best to keep pace but generally, sadly, fall by the wayside as young upstarts such as Creative and Apple lure us all away.

Sony have (finally) realised that touchscreens is where it’s at and now seem ready to break down and get all touchable.

According to Sony Insider there will be 16 and 32GB touchscreen Walkman players at CES 2009 this coming January.

The new machine is said to be rockin a 3-inch OLED display (praps even that 3.3-inch panel making the rounds, or something more Sony specific).

Also planned for the Touchy Walkman is WiFi, enabling a YouTube app, over the air podcast downloads, built-in access to Amazon’s MP3 store and an unspecified web browser.

The shots of the player above are obviously mockups, and the real hardware is supposed to have physical music control buttons and will be drawn to scale.

All this info is exclusive to the Sony Insider know-alls so it’s still not hard n fast truth til Sony says so but hey – I’m sure lots of the Sony faithful will be looking forward to the verification of such a beast.