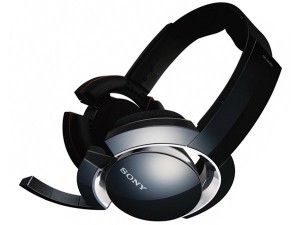 Ideally, what you need is something that will kick out 3D surround sound direct to your lugholes.

Perhaps some headphones with a name that would leave you without any doubt what kind of user they’re aimed at…..

A name such as Ultimate Weapon…..

This gaming headset comes partnered with a separate Dolby Pro Logic IIx box to process your computer’s audio into 7.1-channel surround sound and the all important mic for taunting your foes from around the globe.

If that’s a little too involved you could always opt for the GA-200 model which doesn’t bother with that extra processing.

For maximum comfort on those long sessions both headsets sport super special “triple enfolding” padding – so no more excuses of uncomfy cans distracting you being the reason for the amount of ‘friendly fire’ you’ve been dishing out.

As an extra gaming bonus you’ll get a free copy of the latest ‘Medal of Honour’ single player with your new headgear.

As per usual there’s no word on prices but expect them to appear around mid-October.